The President of the Tulsa Peace Fellowship, Mark Manley, invites you to join us this Saturday for a peace vigil dedicated to the theme of ending Obama's drone warfare.

"Our country continues to execute people in far away lands without charges or trial. We need to spread the word that this is unacceptable."…

WASHINGTON, DC – June 27th, 13 death penalty abolition activists went on trial in DC Superior Court to face a charge stemming from a January 17 arrest this year at the U.S. Supreme Court. On that date, 14 protestors unfurled a 30 foot banner, which read “STOP EXECUTIONS!” on the steps of the Court. Such displays of banners are prohibited under U.S. law. At… On June 27, the trial begins for the 13 anti-death penalty protestors who unfurled a "STOP EXECUTIONS" banner on the steps of the U.S. Supreme Court on January 17, 2012 - the 35th anniversary of the first modern-era execution in 1977.…

Focusing on the theme: "Put Away the Sword--Follow Jesus in Nonviolent Revolution," about 50 people from the Atlantic Life Community,  the New Jerusalem Community in Philadelphia, Loras College in Iowa and other peacemakers gathered in Washington, D.C. from April 4-6…

This petition, being circulated by David Swanson, is online here: http://warisacrime.org/nobel

At our recent meeting, held on Thursday March 8th 2012, the TPF executive endorsed the petition movement.

In 2009 when US President Barack Obama was awarded the Nobel Peace Prize, Obama had just been placed in a position of great power promising to expand the world's largest military, to…

In two days we will be having our monthly meeting combined with a movie night. The feature movie is "Bringing Down a Dictator". It's the story of the activists that brought down the Serbian dictator Slobodan Milosevic and their tactics. Please join us. Several members of Occupy Tulsa will be there and we can all compare notes.

Place: UU Church of the Restoration…

WASHINGTON, D.C. – Thirty-five years after the first execution under contemporary laws of Gary Gilmore, fourteen members of the Abolitionist Action Committee were arrested at the U.S. Supreme Court on Tuesday. Just after 10:00 am, at the exact time that Gilmore was…

Report on the Holy Innocents Faith and Resistance Retreat in Washington, D.C.

MLK parade in Tulsa on Monday Jan 16th | Can you march with TPF in the parade?

The Tulsa Peace Fellowship will be marching again this year in the Martin Luther King Parade, on Jan 16th 2012. We paid our entry fee for one vehicle and a group of up to 20 people. We have our official entry number.

Last year, T. Nuspl and J.MacMahon were at the head carrying/holding the TPF white/green banner, and B. Cheek drove the…

from THE TULSA PEACE FELLOWSHIP, a registered non-profit organization

First of all, you are all invited to attend the "Peace Vigil" tomorrow, starting at 12 noon, corner of 41st & Yale, southwest corner.  The 10th year of Afghanistan occupation starts next week, on Oct 7th.  Will you raise your voice in protest, or allow this to go on indefinitely, with no end in sight?

If you won't join us this time, then when… 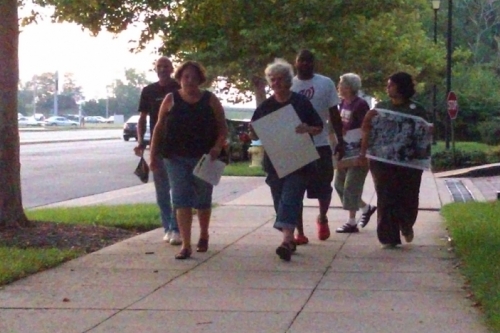 Bill, Rosemary, Sr. Margaret, Kevin, and Amber are ready for their witness.  Kathy keeps them company

A documentary film by John Pilger

Do you have photos of MLK parade in Tulsa to share?

TPF participated in the MLK parade through OSU-Tulsa campus and Black Wall Street and the Brady District, this year.  Special thank you to Jean for wearing the polar bear costume, for making placards, for holding the banner, and for doing up her car with peace signs.

If you have photos or video of the TPF entry, or other peace-related entries, in the 2011 MLK parade in Tulsa, please upload them, or send them to us via email:  armywrong@cox.net

Donations to TPF are now possible through GOODSHOP and GOODSEARCH

You are our only foundation - TPF does not enjoy the financial support of grant-making foundations or corporate sponsors. The work of the Tulsa Peace Fellowship is predominantly funded by individual donors in Northeast Oklahoma who know that investing in peacebuilding works.